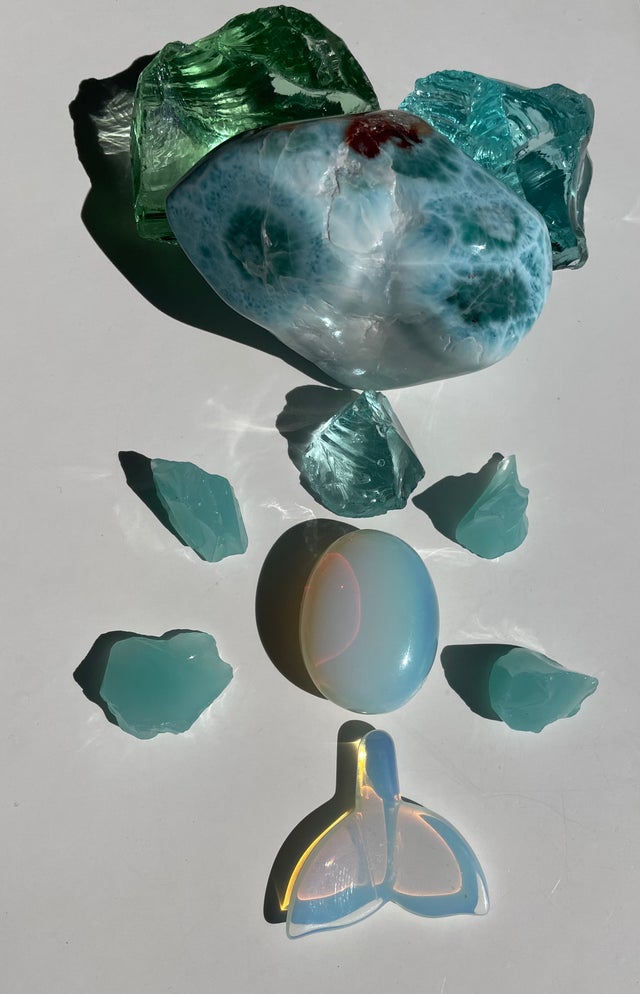 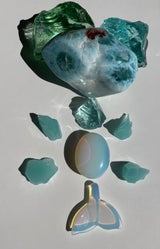 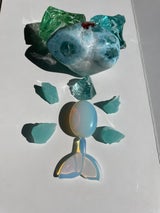 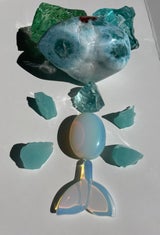 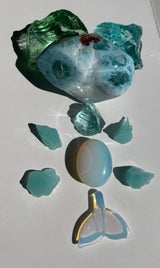 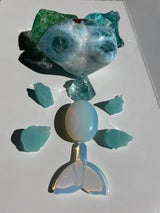 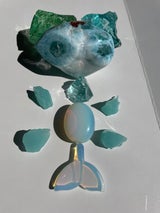 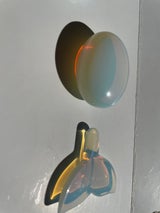 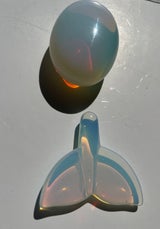 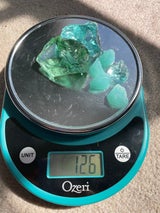 This team head is a polished Larimar piece, that holds the codes of the

It has the eyes of ET - and has an amphibian galactic water world codes and communication portal potential.

The Lariamar "head" is supported by two medium/large piece Andaras, an aqua and light blue. In the Poseidon Temple color palate.

The body and tail are Opalite pieces, one round and smooth, one shaped as a mermaid/whale tail.

Five small andaras complete the set, four small opaque sea green, standing in for legs/arms/flippers/fins and a small aqua andara at the "throat" for communication powers.

The Stellar and Galactic Communication potential is vast with this team, and you can use as pictured, or of course recreate and mix and match as you are called to. Equally powerful for tuning into Sirius Codes as well as working with the Pleiades.

This sentient being is here for you to connect with and make part of your team, as you Code in New Earth with Galactic Support. Truly unique and potent in all ways.

The Dogon, the Nommos and Sirius B

In Mali, West Africa, lives a tribe of people called the Dogon. The Dogon are believed to be of Egyptian decent and their astronomical lore goes back thousands of years to 3200 BC. According to their traditions, the star Sirius has a companion star which is invisible to the human eye. This companion star has a 50 year elliptical orbit around the visible Sirius and is extremely heavy. It also rotates on its axis.

Visitors from the Stars

The Dogon stories explain that also. According to their oral traditions, a race people from the Sirius system called the Nommos visited Earth thousands of years ago. The Nommos were ugly, amphibious beings that resembled mermen and mermaids. They also appear in Babylonian, Accadian, and Sumerian myths. The Egyptian Goddess Isis, who is sometimes depicted as a mermaid, is also linked with the star Sirius.

The Nommos, according to the Dogon legend, lived on a planet that orbits another star in the Sirius system. They landed on Earth in an "ark" that made a spinning decent to the ground with great noise and wind. It was the Nommos that gave the Dogon the knowledge about Sirius B.

The legend goes on to say the Nommos also furnished the Dogon's with some interesting information about our own solar system: That the planet Jupiter has four major moons, that Saturn has rings and that the planets orbit the sun. These were all facts discovered by Westerners only after Galileo invented the telescope.